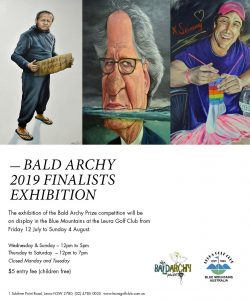 The Exhibition of Bald Archy Prize finalists will be held at Leura Golf Club (Wednesdays-Sundays) from Friday, 12 July to Sunday 4 August from 12pm – 7pm (Sunday 12pm to 5pm). Entry is $5 (children free).

The winner – which carries a prize purse of $10,000 – was Simon Schneider, for his painting of Australian actor, Geoffrey Rush.

Schneider’s work was one of two featuring the great Australian thespian, but infamous cricketers and politicians were without doubt the most favoured subjects for the canvases (though in cricketer Cameron Bancroft’s case, one of the entries was suitably painted on sandpaper).

Simon Schneider, who is a well-known artist, illustrator and caricaturist, and a finalist in the Doug Moran Portrait Award, explained why he couldn’t resist the opportunity of showcasing Geoffrey in his entry:

“I chose Geoffrey Rush because he has a face full of character and is a caricaturist’s dream,” he said. “He is also one of Australia’s most accomplished actors. Due to recent allegations, I came up with the concept of him being in deep water, merely reflecting his current situation. However, my main motivation for painting him is purely because he has a great face for caricature!”

Politicians did get recognised in this year’s awards, with Brisbane artist Marty Steel’s hat-trick of acerbic depictions of political figures – Tony Abbott, Christopher Pyne and Bill Shorten – standing out in an avalanche of colourful political caricatures.

The Bald Archy Prize has been running since 1994, when founder Peter Batey decided there was a need for “the larrikin’s answer to the slightly more serious Archibald Prize”.

Unfortunately, Peter Batey died recently in a car accident, but his legacy will carry on through the annual awards.

His philosophy was simple, and he declared himself very happy with the selection of the 2019 finalists: “We love to push the envelope, have fun and avoid the pretensions that sometimes afflict other more ‘serious’ art competitions. The satirical side of this event has its basis in the irreverent, larrikin Australian comic comment, and the finalists this year have been fortunate to have had so much inspiration to draw from. It’s been a vintage year.”

This year 53 entries were received, and 43 made the cut to be hung in the exhibition. Amongst the entries this year, the Federal Liberal Party’s backroom brawling features several times, including a version of The Last Supper with Malcolm Turnbull as Jesus before his betrayal and another titled ‘Et tu, Scottie’ referencing Shakespeare’s immortal line in Julius Caesar.

Departed MP, Christopher Pyne, is featured wielding a baseball bat, Barnaby Joyce is constrained in a straight jacket, and ‘loser of the unloseable election’, Bill Shorten, makes his Bald Archy debut in a work that has him hitchhiking to “nowhere in particular”.

Last year’s Bald Archy awards featured a painting of Australian cricket captain, Steve Smith, but the work was ‘scratched’ when word leaked out about the ball-scratching drama, and not surprisingly that lower-than-low incident is reflected in a number of entries this year but most appropriately in Phil Meatchem’s Ball Tampering, which features a portrait of Cameron Bancroft, fittingly painted on sandpaper.

Hotel owner and developer, Dr Jerry Schwartz, is sponsoring the exhibition of the Bald Archy Prize finalists in Sydney, Blue Mountains, Newcastle, and in Melbourne.