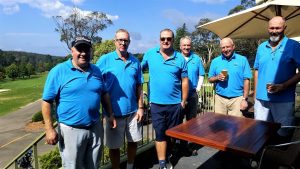 It was our pennant year this year. Nothing but a truly great performance from a wonderfully dedicated team. From the five gruelling rounds held at Lithgow, Leura, Wentworth Falls, Oberon and finally Blackheath. The teams consisted of Hamish and I, Tom Cook and Wayne Clayton, and Phill Noble and Stephen York. All played outstandingly. Over the 5 rounds we had a total  of 11 match wins, 3 match draws and only 1 match lost. A truly marvellous performance and probably unheard of in the history of Kortum shield. A big thanks to Carl Jennings and John Hogan who filled in for our first match at Lithgow.

Thanks also to the hosts, Chris our new club captain for his support at Oberon and Blackheath and also to Bruce Cox for his support at Blackheath in providing the drinks (I think the beers helped🤣). Many thanks to Brian Tulloch (Pennants coordinator) for his outstanding contribution with helping team captains in their match preperations.

What more can I say? It was a pleasure to captain a splendid team who performed admirably and I can only look forward to defending our title once again next year.